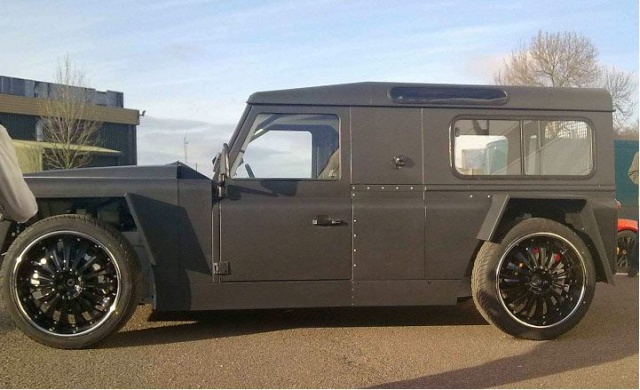 We know it doesn't look like much more than an old school Land Rover, but underneath all the patchy sheet metal is the impending Spyker D8 Peking to Paris. At least they put a beautiful set of blacked-out rims on this Frankenstein-esque creation.
In case you don't know, the Spyker D8 debuted three years ago in Geneva as the D12 concept, back when the luxury crossover was sporting a Volkswagen W12 engine. Rumors have been flying around for a short while suggesting the ride will now use either an American-made V8 engine, or the 4.2-liter V8 from Audi. Switching engines has fueled the crossover's name change. While the engine choice is a rumor, the name change most certainly is not. Spyker and Lotus have both referred to the D8 Paris to Peking in press releases, most notably when the announcement was made that the British firm would subcontract engineering on the D8 and Spyker C8 Aileron from the Dutch manufacturer. Amongst the work being performed by Lotus is a brand new suspension.
Back when it was the D12, the Spyker crossover was said to run from 0-60 mph in five seconds, on its way to a 185 mph top speed. It is unclear how drastically performance would diminish because of the smaller, less powerful engine. The smaller engine could also mean a lower price tag than the expected cost of around $300,000. A dip in the price could prove beneficial for the company if they can maintain performance figures. Spyker has taken a gamble on the crossover, betting that demand for the vehicle will help deliver consecutive production and sales increases for the company. Spyker, which was very recently in financial trouble officially reported production and revenue increases for 2008.
The Spyker D8 Peking to Paris has been announced for production beginning at the end of the year.

Similar topics
» A short, round carrot variety?
» vermiculite and other stuff
» Made a plan for my spring boxes
» heat resistent lettuce
» L'Ambassade Américaine ...